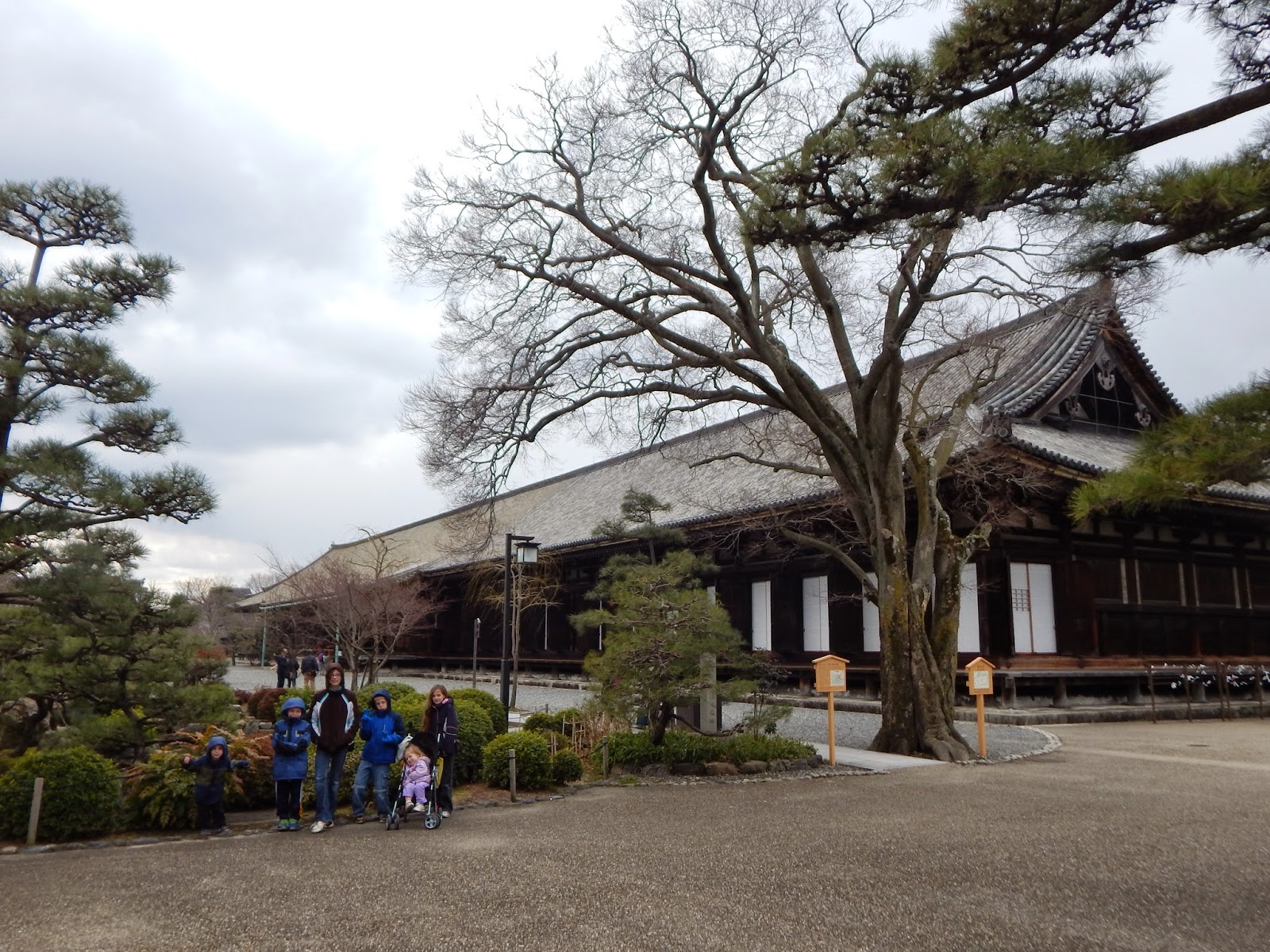 Thursday, March 5th--We spent the morning packing everything up and taking our carry-ons to the Kyoto Station to store in lockers for the day.  Around 11 a.m., we bought day tickets for the bus and made our way to the Sanjusangendo Hall. 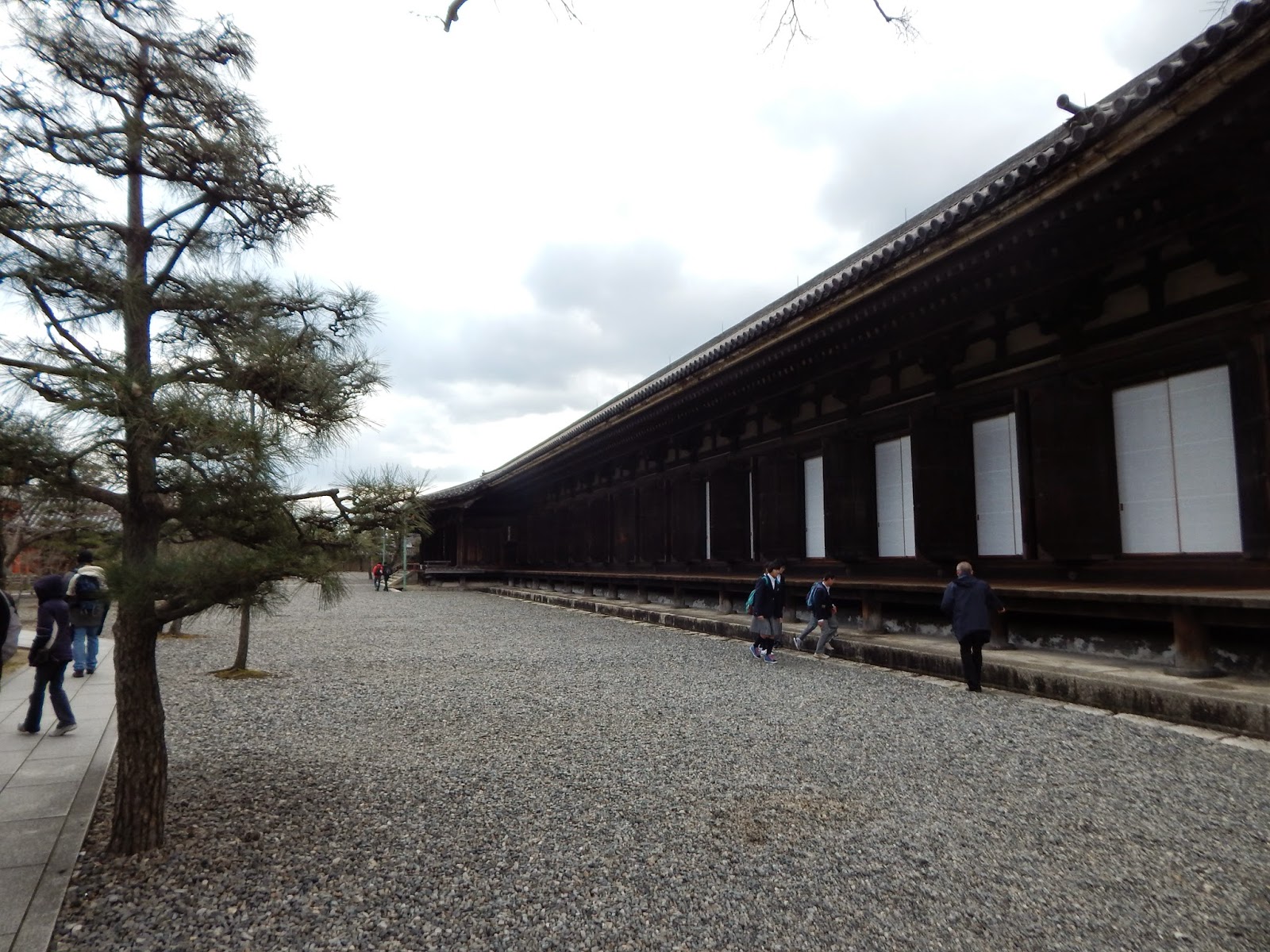 The temple hall is the longest wooden structure in Japan.  It wasn't ornate or beautiful like the many other shrines and temples that we have seen in Kyoto.  It was rather plain, actually. 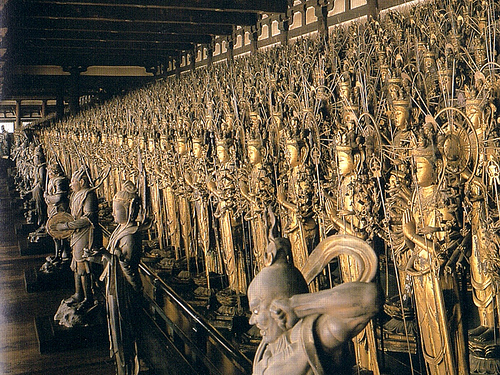 We paid to go inside the building.  After changing our shoes for slippers, we entered the vast room full of Kannon statues.  The building is not heated, so it was a little chilly inside.  It smelled musty and old.  Everything was really dusty and there were a few spider webs on the Kannan statues.  (we were not allowed to take pictures inside the building, so these are from the internet)

These 1000-armed Kannon are equipped with 11 heads to better witness the suffering of humans and with 1000 arms to better help them fight the suffering. The actual statues have only 42 arms each. The website for this place states that one needs to subtract the two regular arms and multiply by the 25 planes of existence to get the full thousand.  Maybe that makes sense to someone, but not to me. Sanjusangendo was founded in 1164. The original temple was destroyed by fire in 1249; the present structure dates from its rebuilding in 1266.
The Kannon statues that fill the temple were carved in the 12th and 13th centuries by Tankei, a famous sculptor of the Kamakura Period. They are carved from Japanese cypress and covered with gold.  Upon close inspection, we noticed a little bit of red paint under some of the chips of gold.   Maybe at one time they were painted.

The temple centers on a six-foot-tall statue of Kannon, the Buddhist goddess of mercy. The central Kannon image dates from 1254.   One thousand of the smaller statues were on either side of this big one in the middle--500 on one side, 500 on the other side.  There were a few Buddhist priests sitting at a desk in front of this large Kannon.  There was a table where one could buy a candle for 1000 yen and have it lit as a religious ritual.  By lighting a candle in your name, it would represent your soul receiving a "baptism by fire".  At least, that's what the sign above the candles said.

In front of the Kannons are statues of 28 Japanese deities who protect the Buddhist universe. They represent Kannon's disciples and embody various virtues. Finally, there are two traditional Buddhist temple guardians: Raijin, the god of thunder, and Fujin, the god of wind.
We didn't know what to think about what we saw in this vast room.  It was jaw dropping.  The detail of the Kannons and the vast number of them....a lot of work went into creating all of this.  The Kannons were beautiful and there were so many of them it was overwhelming.  Overwhelmed.....that's the word for how we felt about this place. 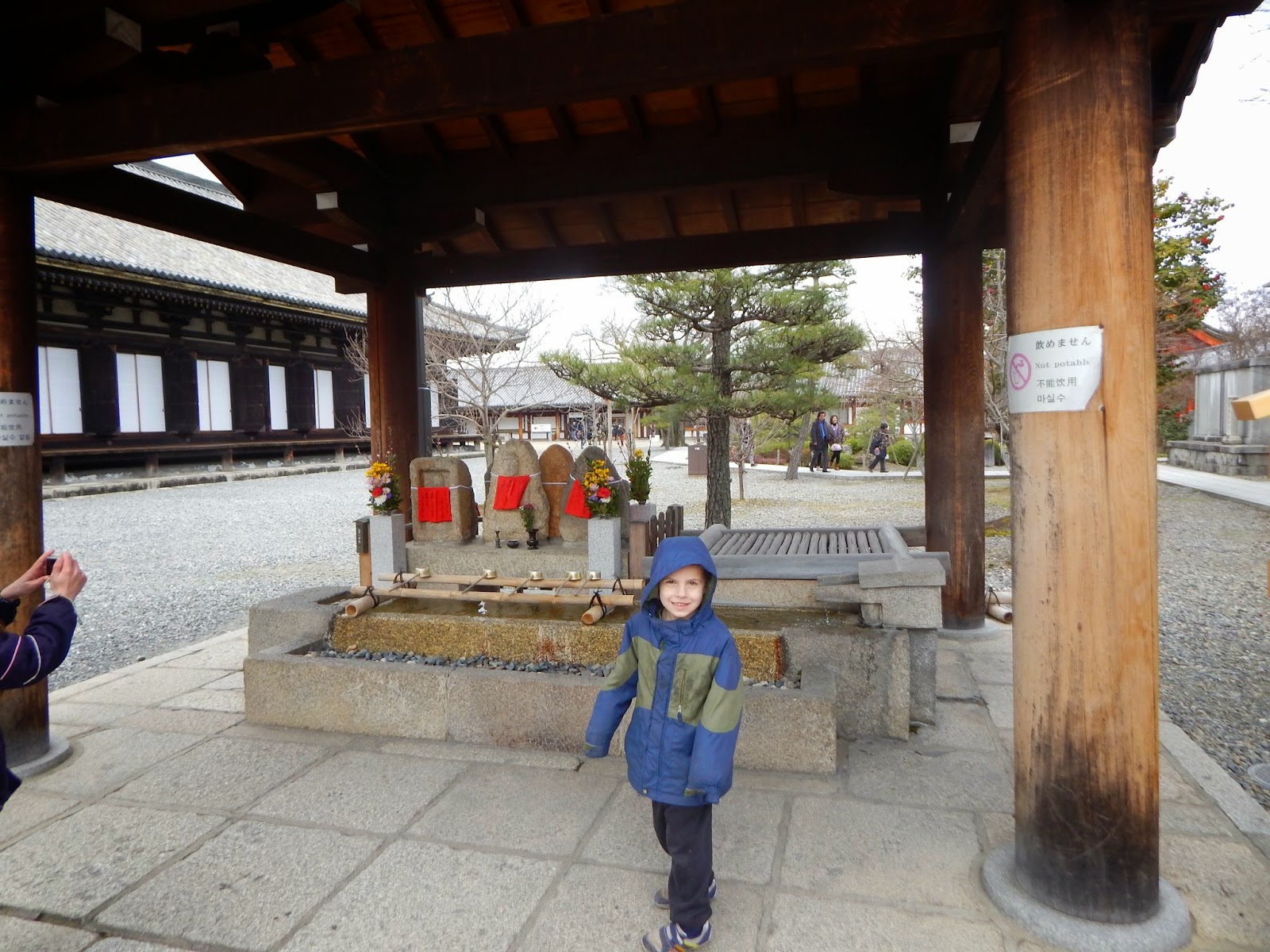 We got our shoes back on and walked around the grounds for a little bit.  And then, we found a GOLDMINE!  This well!  The year after the worship hall was founded, this spring was discovered in a dream by one of the temple's priests.  Its water is very cool and delicious.  The sound of the water gushing is like a human cry, so it was named "The Spring Crying in the Night".  It is said that drinking the water from this spring will help babies to sleep through the night......well, if that's the case, why haven't I come to this spring a long time ago?  Where has it been all of my mothering life??  Give me some gallon jugs, I want to stock up!!  As we approached the well, we saw a sign stating that you could not fill up any containers with the sacred water.  I guess others have thought about stocking up on this magical baby-sleeping-through-the-night water, also. 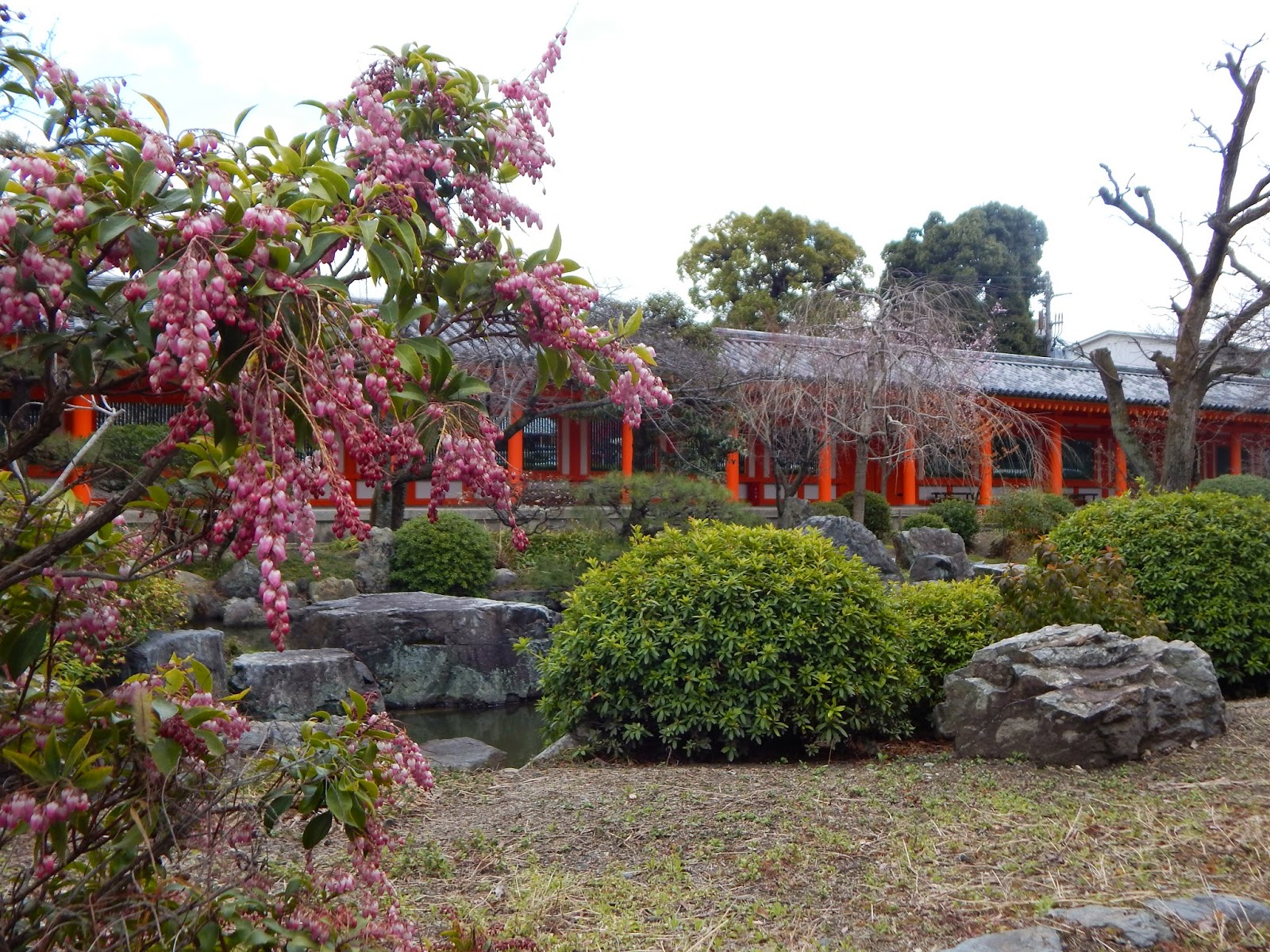 While the Kannon building itself is very plain on the outside, the gate and fence surrounding the complex was painted the bright orange that we have seen so much in Kyoto.  There was a small garden area with a pond which was also lovely.  It was a little windy and chilly, though, so we didn't stay a real long time.  We went back to the bus stop and waited for our bus to show up.
Posted by Tara at 5:21 PM